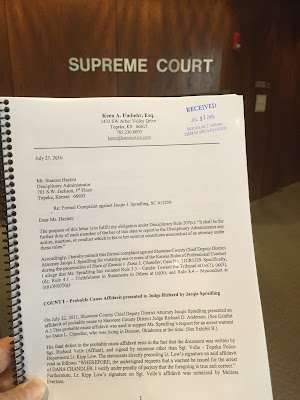 On January 27, 2016, the Kansas Supreme Court heard oral arguments in the appeal of State of Kansas v. Chandler. During oral arguments the lead prosecutor in the case, Shawnee County Chief Deputy District Attorney Jacqie Spradling was questioned by justices of the Supreme Court about statements she made during the trial which were not backed up by evidence in the record.

On July 27, 2016, Keen Umbehr filed a formal ethics complaint against Jacqie Spradling, citing Disciplinary Rule 207(c): “It shall be the further duty of each member of the bar of this state to report to the Disciplinary Administrator any action, inaction, or conduct which in his or her opinion constitutes misconduct of an attorney under these rules.”.

Count I of the complaint has to do with Jacqie Spradling submitting a defective probable cause affidavit to a judge (Exhibit A below), in order to obtain an arrest warrant against Dana L. Chandler (Exhibit B). The 15-page probable cause affidavit was written by the lead detective in the case, Sgt. Richard Volle, and signed under penalty of perjury by Lt. Kipp Lowe of the Topeka Police Department.

During the trial of Dana Chandler, Judge Nancy Parrish expressed "grave concerns" after discovering that the affidavit was signed by someone other than the affiant(Exhibit C).

At that point, Jacqie Spradling made the following admission: "I don’t want to mislead this court. There is no document that I found in state’s Exhibit 969, which was the divorce file. There’s no document in that file that is either a Protection from Abuse or a Protective Order. So if I indicated that there was a document, I don’t want to mislead you. I do know, speaking with the victim’s family members, that the order existed. Um, and, that that was discovered by Detective Volle as the lead detective in this case."

Posted by Eileen Umbehr at 4:42 AM